The capital city of Ermoupolis (the City of Hermes) could perhaps not have a more fitting name. Like the god Hermes, the city bearing his name is charming, elegant, refined and has played a partial but very progressive role in Greek history. Today, Ermoupolis is one of the jewels of Greek island architecture and its traditional spirit with its indescribable charisma will leave no traveller cold. Few island capitals can boast impressive neoclassical architecture, combining elements of traditional Cycladic architecture on the one hand and Western European Romanticism on the other. That's why you won't be surprised by the generosity of the main square Miaouli, the monumental town hall designed by German architect Ernst Ziller or the historic Apollo theatre, which is a small copy of Milan's La Scala. Other highlights include the Commercial Court building, the Post Office (one of the first in Greece) , the Library and the Archaeological Museum, where you will also discover rare artefacts from the local Early Bronze Age Cycladic culture of Kastri (Keros-Syros period, c. 2600-2300 BC). This administrative, commercial and cultural centre of the Cyclades is both a national monument of Greek culture and a vibrant, very colourful and cosmopolitan centre of the entire Cyclades. The city is built between two hills, on the tops of which two churches (Catholic and Orthodox) stand proudly, and the whole atmosphere is completed by a number of original neoclassical buildings. The imposing square in the centre of the town takes on a charming atmosphere on warm nights, accompanied by the sounds of live music, while the numerous cafés in the area provide pleasant seating and dining experiences. There are also important religious monuments such as the majestic Kimisi Church, the Church of St. Nicholas with its sky-blue dome, the Church of St. George and the Church of the Transfiguration. In addition to these outstanding sights, you can visit several museums and galleries. The industrial museum with a gallery right on the waterfront or the music museum will surprise you with its ingenious concept. Boat and harbour lovers will no doubt be delighted by a walk around the historic Neorion docks, which are still in use, despite being Greece's oldest shipyard. Incidentally, the port of Ermoupolis was Greece's largest and most important port until the second half of the 19th century. Piraeus gained its importance only after the massive introduction of steam into maritime transport.

The history of Syros is long and full of twists and turns. The roots of settlement go back to the Younger Stone Age, and archaeological finds from Kastri and the necropolis at Chalandriani attest to the existence of fortified settlements in the prehistoric period. Evidence of one of the earliest uses of the potter's wheel and the fact that the city was fortified with round towers are a fascinating probe into the maturity of Cycladic cultures. Ancient Syros was also the home of Pythagoras' teacher, the ancient philosopher Pherecydes, whose bust can be found at the windmill in Ano Syros, which retains the typical atmosphere of the island's Chora. The narrow streets, marble steps and breathtaking views of the sacred Délos will simply enchant you. Of course, the colouring is complemented by the typical blue and white corners with bouganvillia and fragrant jasmine, which will intoxicate you to sit in the typical kafeneion or to taste the local specialities over a glass of ouzo. Saint Michali cheeses are one of the gastronomic gems of the Greek islands.

Because the island is a popular tourist destination, especially among the Greeks themselves, this fact is matched by a really rich offer of services. The numerous bars, restaurants, typical taverns and hidden away nightclubs will surprise you with their charm and ingenious blend of tradition and modern design. All this in an unobtrusive, understated and very pleasing to the eye way. In the early evening, the pastel tones of the facades of the city's opulent houses create a magical scene with their reflections on the surface of the harbour waters. Lovers of quality shopping will also enjoy the view.

The island is a place of many faces, at least as far as the landscape is concerned. On the one hand, there are the inhospitable cliffs, from which the etymology of the island's name derives, a fact that the ancient Phoenicians (Syra = rocky) had already contributed to; the terraced fields in the north, green even in the sultry Cycladic summer, remind you of Asian rice paddies; the fertile plains of Kampos yield tasty fruits and delicious vegetables. Picturesque bays with charming beaches with a very diverse character will tempt you to swim in the turquoise waters of the Aegean Sea. Near the resort of Azolimnos, around Cape Fokiotrypa, you can spot rare Mediterranean seals or even the Eleonora's falcon.

The most beautiful beaches are found in the western, southern and southwestern parts of the island.

The Cyclades are renowned for their magical, mystical and breathtaking views. Syros isn't left behind either. Just climb a little above the town, which itself has a unique amphitheatrical position, or even higher, up to Ano Syros, and you will forget about the Caldera. The women's monastery of St Barbara west of Ermoupoli provides a similarly enchanting view. The natural gems of the Alithini and Plati caves are also worth a visit.

Syros remains a proud, rich and very traditional island. It is an exaggeration to say that, despite the growing interest of sophisticated travellers, it is one of the islands that "Greeks keep to themselves". And they certainly know why.

Azolimnos is a small, quiet resort located 5 km south of Ermoupoli. Over the years, this traditional fishing village has become a pleasant, smaller tourist centre where you can find everything for a peaceful but active and fulfilling holiday. The local sandy bay with a small beach and three piers, offers a pleasant place to sit and lie on deck chairs or in the shade of the numerous tamarisk trees. The tavernas along the sea offer specialities of Greek cuisine spiced with the specifics of Cycladic gastronomy and also offer a magnificent view of the islands of Tinos and Mykonos. The freshness of the fish and seafood could not be greater. Tourist shops and minimarkets offer all the essentials for everyday shopping, and the easy accessibility to the main town by KTEL (public transport), which takes you to the centre in 15 minutes, is a huge advantage. Along the way you will find that there are several very well stocked large supermarkets in town, including an unusually smart looking Lidl. Diving enthusiasts will be pleased to know that there is also a Diving Centre in Azolimnos. 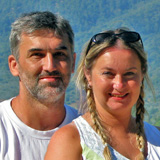